Who was the beautiful Korkyra that the island Kerkyra (Corfu in Greek) was named after ? 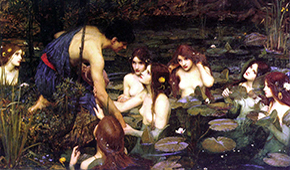 According to mythology Kerkyra was a beautiful nymph ,the daughter of the Asopos river and the nymph Metope. Poseidon the (the god of the sea) charmed by her beauty, fell in love with the wonderful nymph Korkyra, kidnapped her and brought her to an unnamed to that time island. He offered her name to the island : Korkyra or Kerkyra (Corfu). Together they had a child, Phaiax .
Also in the amazing “Odyssey”, Homer mentions the island with the name Phaecian, where Odysseus (Ulysses) reached with the help of the Goddess Athena.

Later he was taken home to the Phaecian Palace and after he informed King Alcinous who really is,The King Alcinous is given a ship to take him safely to lovely Ithaka.
During the return trip the Phaecian ship is turned to a small island, by the God Posideon who was irritated at them for helping Odysseus. Today this islet have the name Mouse Island and is one of the most famous photographed spots of Corfu .

Another mythology hero Jason, also visited the island with the Golden Fleece and it was there that he married Media.
Many historians think that the Kerkyra name is connected with the Byzantine word "Koryfò" that means peak. From the word “Koryfo” comes the Latin name Corfou or Corfu which is the modern name given today to Kerkyra island by foreigners.

More history of the island in http://www.belmare.gr/corfu-history/