Who was the beautiful Io that the ionian sea was named after? 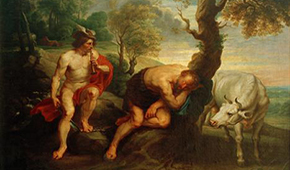 Corfu is an island rich of history and a place of many exciting myths. This island gave birth to the myth of the jealous Hera, and her priestess Io

(after her name Ionian Sea got its name). According to mythology Hera found out about the romance between Io and Zeus
and she was so jealous that turned Io into the cow. Hera imprisoned Io on the island of Corfu, on top of the mountain and tied her to a olive tree .
She also send Argus to guard he. Argus had one hundred eyes and guarded the priestess day and night without interruption.
Zeus decided to help his Iover and sent Hermes to play the pipes to Argus ,until he felt asleep. Finally, Io has been released.
But Hera retaliated by sending malicious bittern who chased Io from island to island until she reached to the Egypt, where she regained her human figure.
More history of the island in http://www.belmare.gr/corfu-history